Night on the Town

Chillin' Out is a winter-themed webisode, based on the doll line of the same name.

The girls are on a ski trip at the lodge, filled with snow, skiing, boarding, and having fun. Chelsea saw an attractive ski instructor and pretended to hurt her ankle to get his attention. After he asked her if she needed help, Chelsea invited him to a party at the lodge she was staying at. The instructor had to decline her offer because he already had plans to hang out with his friends, so Chelsea was disappointed.

At the party, the girls were dancing until suddenly, the instructor said hi to Chelsea. She was surprised to see him, and he pointed out that Chelsea's ankle was fine. She was embarrassed, but he asked her if she wanted to dance and they smiled at each other.

My Scene Chillin' Out Barbie

My Scene Chillin' Out Chelsea

My Scene Chillin' Out Madison

My Scene Chillin' Out Nolee 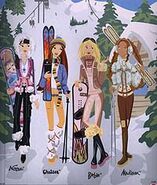 Ski Instructor
Add a photo to this gallery

From the book Crafting Short Screenplays That Connect by Claudia H. Johnson:

Matt Stevens wrote this brief webisode for Mattel's myscene.com, a kid-targeted Web site with games/activities, animated shorts, and toys.
"Chillin' Out was intended to introduce and promote a particular product—the Chillin' Out line, which was My Scene dolls dressed in ski outfits!" Matt laughed. "And to familiarize the user with these characters, since My Scene was still a young brand at the time."
This deceptively simple script is most instructive as it moves so deftly and economically from scene to scene and tells a complete story in thirty seconds.
The process of writing and producing the webisode took quite a bit longer:

As we usually did, the production team got together to brainstorm the webisode story. There was the producer of the site, associative producer, designer, and me, the writer. Together we came up with an outline: The girls are having a fabulous time on their skiing trip. One of them, Chelsea, spots a hottie ski instructor, and she fakes an ankle injury as a way to get his attention, flirt with him, and invite him to a party at the ski lodge. But the instructor already has other plans and can't attend. Later, he shows up at the party and sees Chels dancing on her supposedly sprained ankle. She's embarrassed that the jig is up! But they start talking, and there's a spark between them.

As with any production, there were a number of restrictions.

The running time had to be kept close to thirty seconds because of file size and load time for the user. There couldn't be too many locations/backgrounds for the animator to create or too many complicated movements by the characters. And for cost reasons, we couldn't use a bunch of different voice actors. Cha-ching! So . . . with all that in mind, I wrote a draft.

Matt's producer was happy with the result but requested one small addition in the dialogue, Chelsea's "I got an idea" to clarify "fate needs a little push" for the webisode's young girl audience.

A designer storyboarded the script, and the producer hired and recorded voice actors. The animated webisode remained true to the script except for one small change: Instead of the girls skiing into the shot at the beginning, as originally scripted—that would have been too complicated and time-consuming to animate—Nolee pops into the frame and says, "Wow, the powder's perfect," then throws a pile of snow in the air, which actually makes for a pretty cool transitional wipe into a wider shot of all the girls.

Matt made a cool transition himself early in the script:

The scenery's not bad, either.

"Scenery obviously has a double meaning here," Matt said, "so it works extra hard in the short script, economically shifting the scene's focus from the girls' chill fun to the hot guy."
And Matt deploys freighted dialogue that does double duty when Chelsea and the instructor meet again:

I see your ankle's feeling better.

Both beats are excellent examples of making dialogue economical but still rich in subtext.
"This kind of highly efficient writing was a terrific challenge," Matt said, "and a great example of what William Goldman calls 'packing the snowball'—an appropriate metaphor for Chillin' Out."
Matt wrote numerous other webisodes before moving on to different projects but is proudest of this first webisode.
"Chillin' Out was live on myscene.com for over five years and was just recently taken down with a revamp of the brand/site. Such is the ephemeral nature of the Web!"

ski into the scene.

The scenery is not bad, either.

Ooo, I think it's fate that you two meet.

Well, fate needs a little push. I got an idea.

Chelsea skis by the instructor and fakes falling.

He rushes to her side.

Hey! You need some help?

Score! Chelsea winks at the other girls, who GIGGLE.

The instructor helps her up.

There's a party at the lodge tonight. You wanna come?

The party inside is hopping.

The girls, including Chelsea, dance to the music. The instructor unexpectedly walks in, sees her.

I see your ankle's feeling better.

She smiles back. They move in closer as the fireplace blazes behind them.

Retrieved from "https://myscene.fandom.com/wiki/Chillin%27_Out_(webisode)?oldid=12148"
Community content is available under CC-BY-SA unless otherwise noted.