Kenzie is one of the My Scene characters. She first appeared in 2004 in the Shopping Spree webisode and doll line. She later appeared in My Scene: Masquerade Madness, My Scene Goes Hollywood: The Movie and some My Scene webisodes.

Kenzie is from Atlanta, Georgia and her astrological sign is Cancer. According to her, her clothing style is "cute with a splash of southern sass!". Her favorite place to hang out is at the mall, where she works. She also works in The Dish. Her interest is in baking treats. Although she doesn't hang around with her friends all the time, she also loves to make them laugh because it makes her happy. Her pet is a Yorkshire terrier dog named Coco.

Kenzie loves to hang out at the mall. She loves to make people laugh and being goofy. She likes to make her friends happy. As for her style, the girl prefers outfits in an extremely cute color. Kenzie also loves accessories, especially colorful bags and handbags.

It’s explained how Kenzie met the other girls in the webisode "Shopping Spree". At first, Kenzie only knew Nolee in the past. Nevertheless, their relationship was severed for unknown reasons. She made friends with Barbie, Madison, Chelsea and Delancey when they became interested in the fragrances and accessories from her cart, especially when they noticed she had a handbag designed by Chelsea that she bought at a flea market. She doesn’t have a love interest.

Where from: Atlanta, Georgia

My style: Cute with a splash of southern sass!

Best feature: My laugh! I always crack myself up!

Just kidding!! I love making people laugh. If they're not laughing at my jokes, they're laughing at something goofy I did. But it's all good! Cuz I'm happy when my friends are happy!

Kenzie's All About Me

Shopping Spree Kenzie Back of the box 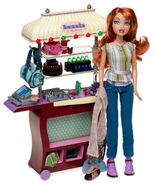 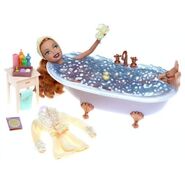 Getting Ready In My Tub Kenzie 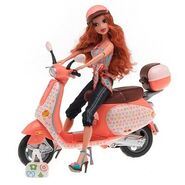 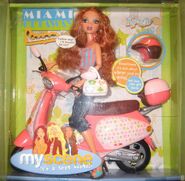 Kenzie in My Scene Goes Hollywood
Community content is available under CC-BY-SA unless otherwise noted.
Advertisement